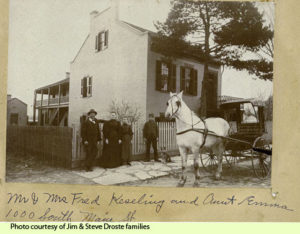 In 1804, an Old Indian Trail was blazed to serve the Boone brothers, sons of Daniel Boone, in their salt manufacturing works in Howard County. This road quickly became the settlers’ route from St. Charles, Missouri, through unsettled country to the Arrow Rock Ferry Landing. From there, the Boone’s Lick Trail continued on to join the Santa Fe, Oregon and California trails.

The Carter Rice building, built originally in 1843, represented one of the most seriously deteriorated and endangered properties in the area prior to the commitment of Paul & V’Anne Mydler. The Mydlers spent six years restoring the building to National Historic Trust standards. In 1987, as they neared completion of the restoration and preservation of the Greek Revival structure, the St. Charles Historic District National Register boundary was increased to include 1000 South Main Street, today home of the Boone’s Lick Trail Inn.

The once dilapidated building was transformed into a six room bed and breakfast, a key structure in the Historic District. Now for more than 175 years the Carter-Rice building has stood silently collecting stories about St. Charles, its residents and visitors. Today the Boone’s Lick Trail Inn continues to be steeped in colonial history. V’Anne and Paul Mydler’s daughter, Venetia McEntire, is a second generation innkeeper. She and her husband Steve Powell also own the luxury boutique inn Boone’s Colonial Inn just a few blocks from the inn’s current location.

‘After every matter arranged we set out’ ~Lewis and Clark, St. Charles, Missouri May 1804

Key to the West

South Main evolved over its period of significance, 1769 to 1920, with varied styles of architecture, yet a sense of visual continuity bound the street into a whole; the basic materials, forms and scale of building remained common even though the details of construction and style varied. Residential uses have always been a part of the mix along South Main. Northern Main Street was more appealing as a place to do business, while South Main remained a desirable residential address. In recognition of its historic significance, South Main was listed in the National Register of Historic Places in 1970. A federally-funded redevelopment project was then launches which was used as a highly unusual tool for preservation; many cities used these funds to demolish their heritage. St. Charles pioneered redevelopment in a historic context on South Main Street. 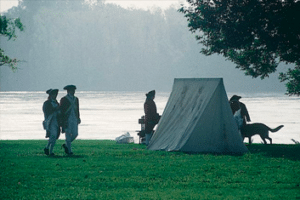 Because of its strategic location on the Missouri River, St. Charles was known as the “Key to the West.” The city entertained Captain Meriwether Lewis, Lieutenant William Clark and their expedition from 16 to 20 May 1804. The expedition was enroute to chart the course of the Missouri and Columbia rivers westward to the Pacific Ocean. Two years and 132 days later, after accomplishing a successful journey, the expedition returned to St. Charles.

Boonslick Road [now Boone’s Lick Road–Justin Watkins], the main highway out of St. Charles from which grew the Santa Fe Trail, the Salt Lick Trail, and the Great Oregon Trail, was established from St. Charles to the town of Franklin in Howard County in May 1820.

Visit us at the Boone’s Lick Trail Inn and experience a small piece of American history!

Reservations
Call for Reservations and availability or book online directly on our secure site. Best rates are direct with us.
Book direct and save.
Call 636-947-7000 or Text 314-575-2925